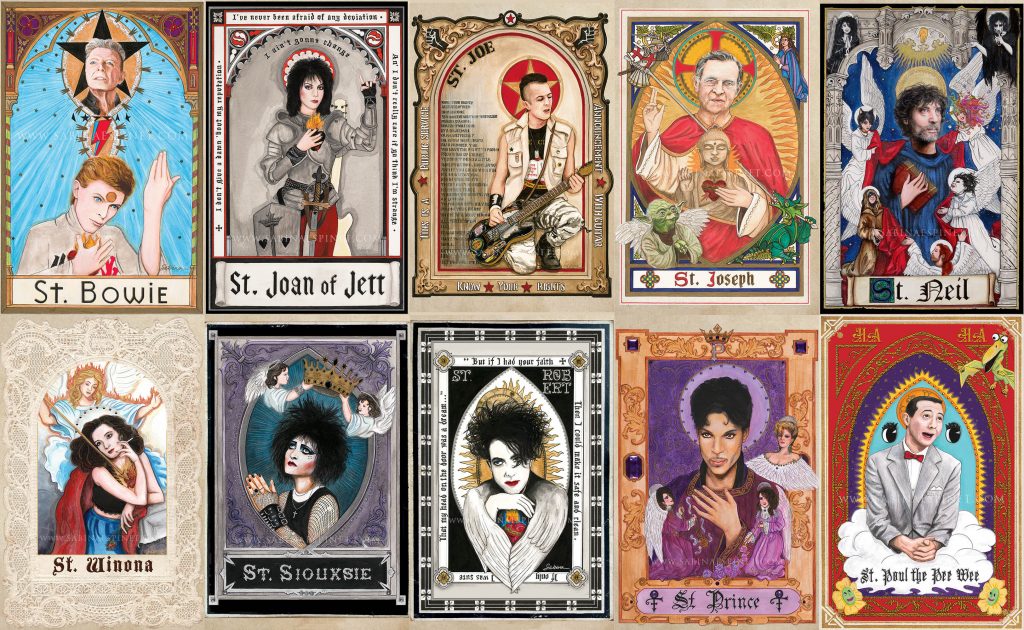 Sabina Espinet is a mixed-media artist and illustrator of several oracle/tarot decks. She is a first-generation immigrant, born in Colombia to Caribbean parents. Her multicultural heritage and early travels throughout South America impressed upon her an appreciation for diversity that she has carried into her work in unique ways. By combining traditional religious iconography, pop culture, and archetypal symbols, Sabina explores our shared human experience as well as our common connection to the Divine, while attempting to blur social boundaries. She obtained her B.F.A. in painting from the University of South Florida, where she studied with Theo Wujcik.

Sanctus- A Pop Culture Prayer Book is a limited-edition book released in 2020 featuring paintings from the artist’s “Saints Series,” with accompanying prayers. It is an exploration of identity through faith and pop culture that combines traditional iconography from Roman Catholic prayer cards with modern pop culture icons in order to create secular saints that reflect a new mythology.

In Catholicism, it is customary to give prayer cards for different occasions. Generally, they depict a saint on the front and a prayer on the back for a specific situation or trial in life. Each saint embodies a certain virtue, and the idea is not to worship the saint but to ask for their guidance. The cards date back to the 1400s, when they were made initially as woodblock prints, and then gained in popularity with advances in modern printing. Throughout my childhood, I received many of these cards. While I stopped attending church in my teens, the Roman Catholic iconography of my early upbringing in South America left an imprint on my psyche. However, I never felt a connection to the saints that lived long ago, so I began exploring the idea of creating my own saints to whom I could relate.

The project started with a list I made of icons who initially helped me to assimilate into American culture and then expanded into a broader idea about identity and what shapes us on a personal and cultural level. I have always felt out of place except for with the outsiders, so for the most part, this collection celebrates individuality and those who have pushed the boundaries of what is acceptable and “normal;” icons who have challenged the status quo in some way.

Pop culture is often dismissed as shallow and those who connect with it are presumed to lack depth, but I believe it is the mythology of our time. In The Power of Myth interviews with Bill Moyers, Joseph Campbell said of religion, “… it has not turned over and assimilated the qualities of our culture and the new things that are possible. The new vision of the universe must be kept alive and the only people who can keep it alive are artists. The artist, his function is the mythologization of the environment and the world.”

Additionally, pop culture is important because it reflects current social issues and provides a window into diversity. For some, it can be the only avenue to access a broader worldview. Pop culture binds us, teaches us, and mirrors back to us our personal and cultural shadow as well as our potential to be heroes. With this in mind, I intentionally challenged myself to find flawed saints, rather than idealized religious or civil rights figures. They are meant to capture moments of my individuation journey in an irreverent and humorous way that reflects my personality.

In this series, Sabina has given preference to an abbreviated selection of images that best represent her experience as a first-generation immigrant and the people and characters who helped her both to assimilate into American culture and to accept her place as an outsider—physically and metaphorically. To view the complete prayer book (25 images), or to explore more of Sabina’s work, please visit sabinaespinet.com/saints. In addition, to learn more about the history and praxis of the Tarot as a psychomythological system, we invite you to browse our Library Catalog, which contains an excellent collection on this topic.