The Creation of Consciousness: Jung’s Myth for Modern Man 

Forty-two years ago, Daryl Sharp, the publisher of Inner City Books, had a mother of an idea: “I am going to publish nothing but manuscripts by Jungian analysts.” As part of their training, analysts must complete a diploma thesis. Sharp looked to these as ripe for the picking and ready-made for public consumption. But, he also published everything he could get his hands on by his favorite authors: Marion Woodman, Marie Louise von Franz, James Hollis, John Dourley, and Edward Edinger. I counted 16 Inner City volumes by Edinger on our Library’s shelves, one of which is the title under review today. Sharp died in 2019, but he left a rich legacy on a wide variety of Jungian subjects by over 50 Jungian analysts, much of which would not have gotten into circulation to the general public otherwise.

Edinger himself has become somewhat of a controversial figure, thought by some as promoting Jung as nothing less than the Second Coming. To these critics, Edinger appeared to have cast himself as a kind of Jungian “evangelical.”  However, in reviewing The Creation of Consciousness: Jung’s Myth for Modern Man, we will count on our guiding questions for this column to keep perspective:  “What was the author up to in this book?” And “What does this text have to offer us after all these years?”

In our text, Edinger clearly is promoting Jung as “The Epochal Man” (p. 13), by which he means Jung is quintessentially representative of our age, further saying that Jung’s life and work constitute “the most conscious life ever lived” (p. 57). The etymology of the word “enthusiasm” is enthusiasmus, “to be filled with god.”  Perhaps we need to coin a new word here in behalf of Edinger’s feeling for Jung: “enjungiasmus.”

In a well know passage from Jung that Edinger quotes, he underscores Jung’s emphasis on the importance of consciousness:

“Man’s task is to become conscious of the contents that press upward from the unconscious. Neither should he persist in his unconsciousness, nor remain identical with the unconscious elements in his being, thus evading his destiny, which is to create more and more consciousness. As far as we can discern, the sole purpose of human existence is to kindle a light in the darkness of mere being.”

For its idolatry of Jung, Edinger’s work overall can be a bit much. It is not so much what Edinger is saying in regard to Jung’s psychology, but how he says it, how he presents Jung.  On the other hand, fans of Edinger say that he is one of the clearest presenters of Jung’s ideas.

In The Creation of Consciousness, Edinger sees Jung’s life and work as providing for the future of humankind a psychomythology of consciousness, a living myth that will make the difference to individuals who feel that the embrace of technology, the unbounded greed of corporate capitalism, the worship of materialism, and the ever-present distractions from serious soul-work all have left us spiritually bankrupt and psychological inept and desperate.

According to Edinger, Jung brings us a relationship to the psyche in which everything is rediscovered as if for the first time. It quickens the religious instinct and opens us up to a greater mystery than this disenchanted and disillusioned universe of our recent making has to offer.  Indeed, Edinger views Jung’s works as a cathedral built to the psyche at a time when for many humankind’s psychological and spiritual life is in ruins.

The archetypal world, what Jung refers to as “the reality of the psyche,” is longing to unite with our consciousness, to be made conscious, to incarnate, and the myth for our time is to take that longing to heart and respond. In the process of doing so, the gold of the alchemical process so celebrated by Jung is created in the soul of the individual.  (Edinger is one of the premier interpreters of alchemy in Jung’s works. See his Anatomy of the Psyche, available from the Library). This is a transformative experience. It creates a relationship with the psyche that gives our life renewed purpose and meaning and broadly speaking constitutes the individuation process in Jung’s work.

In Edinger’s words, “(This) lays the groundwork for a new world-view, a new myth for modern man, a new dispensation that connects man to the transpersonal psyche in a new way“ (p. 60). Additionally, in Jung’s words, quoted here by Edinger, “This may well involve a tremendous change in the God-image” (Jung’s Letters, vol 2 p. 118).

The Transformation of the God-Image (another of Edinger’s Inner City titles and a concept addressed in Chapter 4 in our text) is the most profound inner work an individual does on behalf of him or herself and the collective. In truth, there are many images of God inadequate to modern life. However, Edinger is talking about a God-image that is superordinate to the ego, located first within the psyche, and that is transpersonal, transcultural, and transhistorical in essence. This is what Jung referred to as the archetypal Self.

We could take this archetypal Self as a “transcendental subject” in which the ego itself is the object. In other words, rather than the ego objectifying God for its own purposes, the ego becomes an object of God’s knowing, God’s desiring.  The interesting psychospiritual question then becomes, “How does being known by God, being desired by God, as a presence within your own psyche, change the way you live your life?”

Rather than the ego aggrandizing itself and in the process putting godlike energy into technology, sanctifying greed, and identifying with power, the ego is relativized, emptied out, and tuned in as an object of God’s desiring.  The ego in effect becomes a vessel, mythologically speaking, the Holy Grail, around which many stories serve the Jungian imagination and nourish the soul.

In sum, Edinger emphasizes a part of Jung’s psychology that speaks to a new center of the psyche, the archetypal Self. Practically speaking, this is a move from ego-centrism to Self-centeredness; Self-centeredness meaning that we orient to the greater mystery in which, and of which, we derive purpose and meaning. This creates an attitude of receptivity and awe to what the psyche gives us moment by moment.

All this religiously infused language often confuses people who take Jung at his word, that he is a psychologist first and foremost, not a theologian. Jung himself repeatedly says he is an empiricist, not a metaphysician.  However, once one understands where Jung is coming from (and Edinger will tell you if you are in doubt!) most are admittedly drawn more deeply into the religious nature of the psyche, one of Edinger’s main considerations in our text.  Edinger, in a close paraphrase of Jung, concludes with what Jungian depth psychology offers our time:

“Depth psychology melts down the dogmatic structures which were the traditional containers of the (archetypal) images and recasts them in modern molds of understanding. According to the psychological standpoint, man cannot get outside his own psyche. All experience is therefore psychic. This means it is impossible, experientially, to distinguish between God and the God-image in the psyche.” (p. 91)  For Edinger and Jung, the primacy of the psyche, the reality of the archetypes, the centrality of the archetypal Self, and the ego as vessel for it all, point the way into the future in which consciousness itself makes a world of difference. 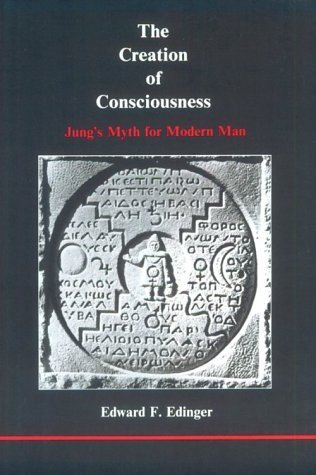 Where to Find this Book?

Book not available for purchase? Consider borrowing it through the C.G. Jung Library of Tampa Bay. Request lending library access (see link on this page), or click to go to the library.